The game is simple and straightforward, but I would say that it lacks more levels and skins because in two days I had completely finished it. Really the difficulty is too easy in 90% of the levels, and you never feel like there is progress in difficulty as level 100 can be much easier than level 20 for example. The time is very short, to the point where you even win having lost at the last moment “holding on”, or simply cornering the bees you spend almost the entire game.

Very good, I was expecting a crappy game but it is really as it is shown in the ads. It’s very entertaining and sometimes a solution seems easy to you until you try it and see that it can’t be like that, it makes you think a bit to pass the level with 3 stars. The only bad thing I’ve noticed is that sometimes the bees get through the ones you draw if they get too tight, and that makes you lose unfairly. About the skins, they are good, but I wish there were more.

Excellent game to improve in several aspects, since I play it in my free time and I had too much fun even with all the stars that can give it a difficulty but they are poorly implemented since if you pass the line too fast, it is spent except for the star which can be good as a mechanic at some levels but not at all, also when pressing with two fingers when having this mechanic that the faster you can put the more, it gives a lot of lag or something like that.

The game is entertaining, I just wish there weren’t so many ads because you finish a game and Boom! (Xd) ad..It’s very annoying that you always end a game and an ad, ugh. Another thing that made me uninstall it is that when I finished a level an ad appeared and when I remove the ad it makes me do the level again, and just like a loop, what a nuisance! I don’t recommend much.

The game is functional and very entertaining but the excess of ads is overwhelming and stressful and you always have to play offline. The game also often has problems with bugs like bees crossing the drawn lines or things like that. Things that could easily be fixed with a patch and decrease the frequency of ads.

The game is good. It’s a bit easy but have fun and have a good time. The downside is the ads that are on each level. It’s the bad thing about most of today’s games that they saturate them with ads and it is understood a little that it is to raise money for the creator or anyone who is behind each game but with how repetitive it is it ends up annoying even though the game be good, you finish a level knowing that there is going to be an annoying ad and that’s right, that doesn’t change, unfortunately they are.

To start with, too many ads, it’s not enjoyable, if you want to play you have to use an ad blocker, and I understand that the creators have to eat and stuff, but at least make the game playable, I think, because it’s hardly playable that way. Once inside the game: – Very bad optimization: my mobile is not bad, and almost everything runs at 60 fps, but when you draw a lot it doesn’t even go at 1 fps. – The bees go through some things, that’s very annoying, and it’s happened to me a lot. It’s not much more but it’s enough already.

Good game, quite entertaining, the only thing that bothers you is the massive advertising while you play and when you finish passing a level, it would be good if they pay attention to that and put 1 advertising every 2 levels and that it doesn’t last too long, everything else is fine . If the ads bother them, they simply disconnect from the Internet and that’s it, the game is entertaining but sometimes it’s slow when I use “more” the pencil so I have to draw as little as possible so that it’s not slow, but everything else is very good game only failed them that of drawing more.

This application is very good, apart from the fact that you can play it without a wi-fi internet connection but at the beginning they put many ads and of course… the creators or creators need money, money, silver, whatever they say, but it is not so difficult in the first levels: D and my opinion is that they put more animals of all kinds like cats, rabbits etc. Well that’s all byee take care of me

The game is fine, to entertain you for a while, but for each level you pass you have a 30-second ad and it becomes very heavy, and after 4 levels that you have passed you want to leave, not wanting to see the ad repeated again.

I really liked the application But all the time it puts you ads and it is very similar to a game of joining the balls only that it is to save a dog from bees It bothers me that there are bugs and when you turn down the volume it does not go down sometimes I put the lines but they go wrong and the bees go through me it doesn’t matter the game is not that good but the good things are that the puppy is very cute the app has no scams or anything and it’s fun because you make lines to save the dog good bye🙂. 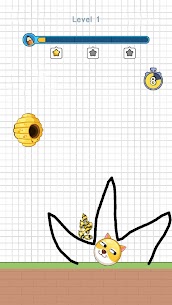 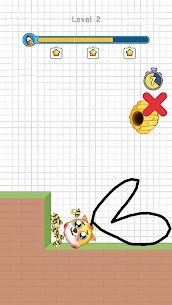 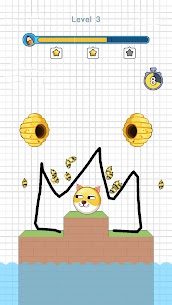 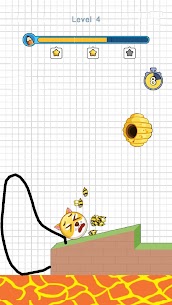 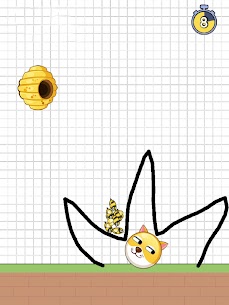